The 4th of July meeting formally held at Lebanon, MO (now in Springfield) began in 1981. Long before that, there was a “Camp Meeting” held for a few years at Bennett Spring state park about 11 miles from Lebanon that began about 80 years ago—in the mid-1930s (see announcement below). Clovis Cook, in his latter years, lived near Bennett Spring and one day in 1995 he and I took a little drive down to Bennett and he showed me the general area where the meetings took place. The photos of the area below come from Google Maps. These photos don’t look like much, I know, but I thought some might enjoy seeing them. For those of you who are local to Lebanon and Bennett Spring, the area Clovis showed me is just north, northeast of the Church of God building that has stood for years in the north-central area of the park. The building is partially visible in the photos below. Although the Church of God structure has been there a long time, Clovis told me that he did not remember it being there in the years when the meetings were held. The whole area was a “wilderness,” I believe he called it.

This meeting is just one of the things that Ronny F. Wade highlights in chapter 7 of his book, “The Sun Will Shine Again, Someday.” The chapter is titled, “Years of Growth and Progress: 1940-1960.” In chapter 7 the time-line begins to emerge from the early decades of the 20th century, into the 30s, 40s, 50s, and beyond. The brotherhood described here begins to take on a more familiar “look and feel” to today’s reader. Chapter 7 audio is posted here: https://restorationaudiobooks.com/audio-books/the-sun-will-shine-again-someday-1986/ 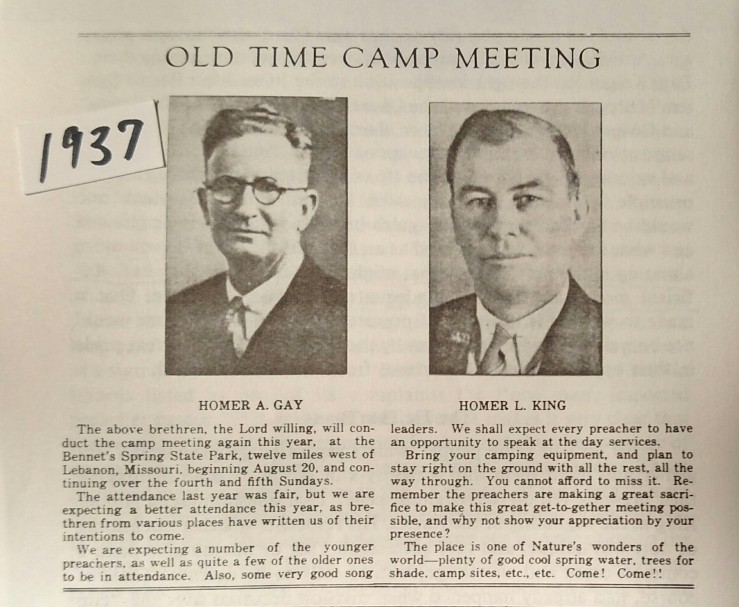